A Brief History of the Future

Stephen Clarke Books / A Brief History of the Future 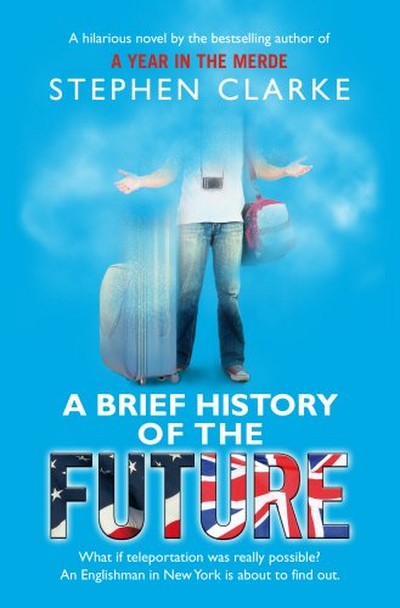 Back in 1997, a team of scientists in Innsbruck announced that they had carried out the first-ever successful attempt at teleportation. They had only managed to teleport a particle of light, but they hailed it as the first step along the path to teleporting humans. They were, the media said, boldly going where no man had gone before.

This novel aims to answer the fundamental question: why the hell did they bother?

That was the pitch on the back cover of my first edition of the novel, which was then called Beam Me Up. It was one of the books I self-published, along with A Year in the Merde, in 2004. And I'm happy to say that it's now out in an updated form as A Brief History of the Future.
When I first read that report about the Innsbruck scientists, I was working as a journalist. One of my jobs was to cobble together a science column. And I kept coming across similar news items. People were seriously trying to turn the fictional technology in the TV series Star Trek into scientific reality. They'd already given us mobile phones looking like Captain Kirk's communicators, they'd invented gas syringes, and someone had even got the early internet modems sounding exactly like The USS Enterprise's transporter beam. And now scientists were getting serious funding to go for the big one – teleportation.
So I began to imagine – what if teleportation was really possible? Not in a television space ship but here and now? Governments could teleport in hit squads to assassinate tyrants, without all that media-unfriendly business of bombing civilians. For criminals, the possibilities would be endless. Who could catch you if you beamed drugs into nostrils a hundred miles away? And how much would illegal immigrants pay to be teleported into the rich host country of their choice?

The novel begins when the first primitive teleportation machine comes on to the market in modern-day New York, with zero publicity, zero internet buzz, nothing. Someone clearly wants to see what happens when it goes viral. That someone, watching the anarchy with a gleam of pride in his ice-blue eyes, is the head of the team who developed the machine – Max Blender. Max is a man with a dream that goes way beyond teleportation. And he knows that to make his dream come true, he has to seduce the President of the United States (metaphorically) and Britain's first ever ex-punk female Prime Minister (literally). Luckily for Max, one of the earliest machines is bought by a man from Bournemouth, England, called Richie Fisher. Richie is in New York with his wife after winning a shopping weekend in a newspaper competition. He's a Star Trek fan and blows all the shopping money on the machine. His wife, Clara, is horrified, especially because she knows all too well that Richie's prize is bound to fall into the grasping hands of his brother, Martin, a man with the conscience of a hyena and a similar laugh. She's right, and Martin's taste for petty crime sends Max's machine spinning out of control, first in Bournemouth, and then everywhere from China to Amsterdam to Iowa. The technology starts progressing at a viral rate. Or at least, Max's research budget does …
The novel is comedy sci-fi, a cross between The Hitchhiker's Guide to the Galaxy, Jurassic Park and an English family sitcom. Richie's dream is simple – he wants to give his young family a solid future. Martin, too, just wants to make a fortune and blow it all on recreational drugs and even more recreational women. Only Max has bigger (much, much bigger) ambitions.

The book is dedicated to the memory of Douglas Adams, who included this short poem in the introduction to his novel The Restaurant at the End of the Universe:

I teleported home one night
With Ron and Sid and Meg
Ron stole Meggie's heart away
And I got Sidney's leg.