Dirty Bertie, an English King Made in France 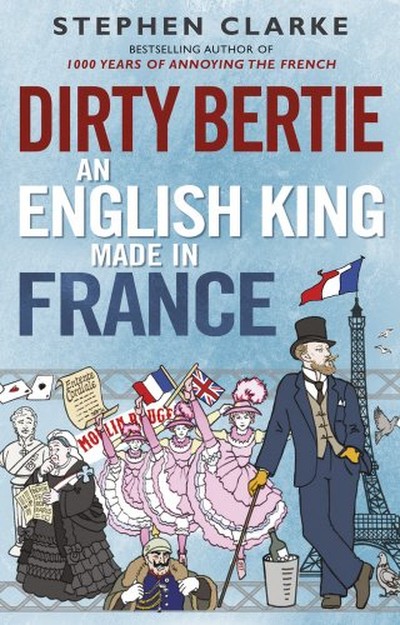 This is a biography of sorts of one of Britain's most outrageous – and under-rated – Princes. The eldest son of Queen Victoria could have turned into a frivolous, money-wasting hedonist during the 60 years he spent waiting to become King. Well, in some ways he did, gambling fortunes away, and consorting with the most notorious  prostitutes  19th-century Paris could produce (and it produced quite a few). But, as my book tries to show, he put his fun to good use. Escaping from Victorian Britain turned him into an easy-going, open-minded, surprisingly un-snobbish European, a Francophile when his mother had given up on France as a nation of degenerates.

Without Bertie's love of France – and France's unconditional love for him, his accent, his fashion sense, his sheer Englishness – there would have been no Entente Cordiale, of course. And without the Entente Cordiale and Bertie's frequent personal interventions to  calm the manic wrath of his nephew Kaiser Wilhelm, the First World War would have come much earlier, with Britain even less well-prepared.

So: frivolous hedonist? Yes.
Waste of Britain's money? Not really (he paid off most of his debts by borrowing from friends).
Idiot, as his mother thought? Well, despite his allergy to all things intellectual, no.
Britain's greatest royal diplomat? Yes.
The man who turned France's fin de siècle into a real Belle Epoque? Yes.

Fascinating subject for a book full of both outrageous sexual exploits and brilliant diplomatic scheming on the world stage? Well, that's up to you to decide ...