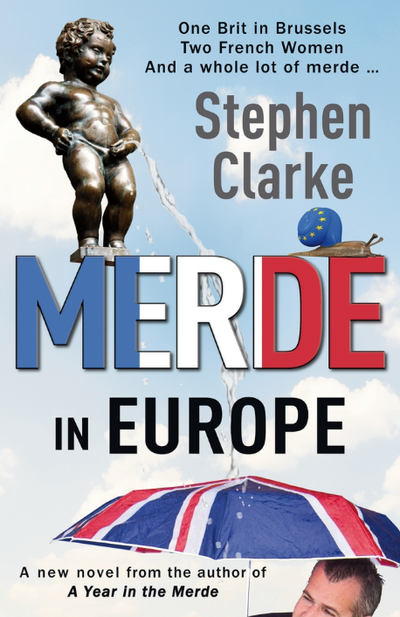 Here's the blurb I wrote for the back cover of the book (below is a more detailed description):

Does Brussels really want to outlaw the British banger, bingo, bagpipes and smoky bacon crisps? Are eurocrats trying to rename the English Channel, to re-define the kilt as women's wear and force lorry drivers to eat muesli? And can the ink in euro notes really make men impotent?

No. Well, not exactly.

But it is true that the EU is a seriously flawed institution, with MEPs getting unbelievable privileges, and fortunes being spent on translating every single piece of Brussels business into languages that no one ever reads.

Englishman Paul West goes undercover to work for a French MEP and gets an insider's view of what really goes on in the massive madhouse that is the EU Parliament.

As Britain prepares to vote whether it stays in or exits the EU, Paul gets the chance to influence the result of the referendum.

He has to decide: better the devil you know? Or bye-bye Brussels? It's a decision that could cost him a lot more than his euro paypacket.

The more detailed blurb, as promised above:

In my new novel, Paul West goes to Brussels and finds out what really goes on in the darkest corridors of the European Union's institutions.

He is offered a job working for a French Member of the European Parliament who claims to be campaigning to keep Britain in the EU. Paul is not entirely sure that she's sincere (after all, doesn't Paris want to depose London as Europe's financial capital?), and when he witnesses the madness that is Brussels, he's not sure he wants to be part of it any more; but he's being paid a fortune in euros, so he agrees to help.

However, the deeper he delves, the more he suspects that something shady is going on. And, aided by the mysterious Manon, a glamorous Franco-German-Czecho-Polish eurocrat, he decides to find out what.

Well, that's the basic plot. It is played out by a multi-national group of Brussels insiders, who all have tales of insanity to tell Paul, and who either help or hinder him in his quest.

Paul mixes with politicians, translators, lobbyists, journalists and people with jobs so absurd that Kafka couldn't have invented them. And he joins in their networking, bed-hopping, back-stabbing, euro-spending lifestyle – or parts of it, anyway.

To research all this, I went to Brussels, where I work-shadowed, interviewed, and observed. Obviously, I was also forced to join in with some of the drinking and general socializing – otherwise it wouldn't have been authentic.

I've had to alter people's names, job titles and genders, and I've invented politicians and their parties, who are IN NO WAY meant to resemble real politicians or political parties, but who might seem unpleasantly plausible.

I've exaggerated some things (this is a novel, after all, not a journalistic exposé), but I found that a lot of journalists twist the truth even more skilfully than any fiction writer.

And what about the Brexit? Well, this novel might not help you to decide whether it's a good idea, but I hope it'll give you a laugh while the politicians are trying to terrify you into voting one way or the other.