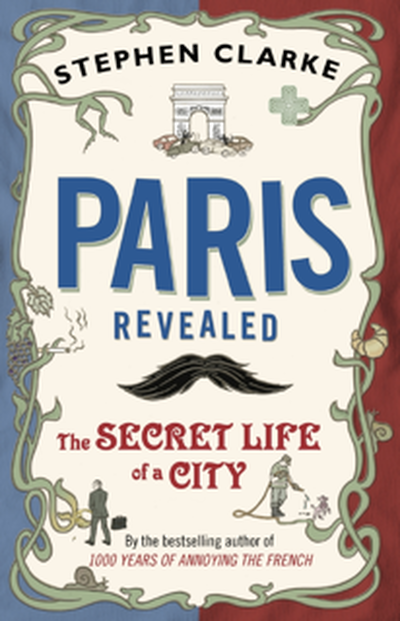 OK, so the secret is out – yes, I’m a Parisien. Ich bin ein Parisian. So if I suddenly start insulting you or being generally grumpy, you will have to excuse me (and even if you don’t excuse me, I won’t care). Anyway, thanks to this status of mine, which has been hard-earned I should say, I’ve been able to write about my adopted home city in extreme close-up. My intention isn’t to put people off Paris. On the contrary, I hope to make it more of a rounded, real character instead of the glitzy superficial image that is often presented to us in guide books and travel supplements. After all, you only really fall in love with someone (or a city) when you know what makes them (or it) tick.

So my book is an insider’s guide, a study of Paris not area by area or museum by museum, but via themes. The pavements, for example, and the people who work on or beside them; the how, why and when of the métro; the city’s obsession with water, which flows in gutters, gushes out of fountains and floods the city once a century (the French think the calendar is metric, so they expect a flood exactly every 100 years). And lots more. In fact the best thing is probably to give you the contents page, so you can see what I’m talking about. So here it is. I hope it will make you want to read more.

Parisians are ‘arrogant, aggressive, stressed, snobbish and self-obsessed’ – at least, that’s what other French people say about them. But who are the Parisians really? And do they deserve their terrible reputation?

A portrait of the city’s streets and the people who work or just loiter there, who battle to keep the pavements clean and the trees alive, and who do their best to confuse pedestrians with confusing road signs.

Life in Paris is a story of eau – the city’s emblem is a boat, and water gushes everywhere, from fountains and along gutters, reassuring Parisians that there will be no return to the bad old days when all they had to drink was the Seine … and wine, of course.

More than just a transport system, the Paris underground is a way of life with strictly defined rules and customs, shifting populations, its very own architect, and some dramatic tales to tell. Includes a line-by-line listing of the most unusual stations.

You might think that Paris is a beautifully preserved historical city, but just imagine how it would look today if the Parisians themselves hadn’t spent so much of their history trying to demolish it. The story of two millennia or more of social and architectural turmoil.

Like a well-chilled glass of Champagne, Paris is always capable of hitting the mark, whatever your tastes in matters of the heart. What are the secrets of the city’s well-deserved reputation as the capital of canoodling?

If Paris thinks of itself as a Latin Lothario, it’s because it is an experienced lover. It has slept around a lot, and always feels the need to kiss and tell. But are its glory days over?

For Parisians, food isn’t only about taste – they also have to squeeze, prod and sniff it to make sure it’s fresh. The problem is, they like doing all these things to the food that other people are about to eat. Includes the best food markets in Paris, and how to spot a good or bad restaurant.

Surprisingly, it was an Englishman who created the concept of Parisian haute couture. And even more surprisingly, the Parisians give him credit for it. But why exactly is Paris la capitale de la mode? A designer explains.

The city’s movie career is stage-managed just as efficiently as that of any Hollywood star, and it has an agent who fights to get Paris’s name up on the big screen as often as possible. So what are the essential ingredients for a great Parisian film?

At the big-name museums and exhibitions, the queues can stretch for a hundred metres. And that’s just to use the toilets. How to see great Parisian art, including some of the biggest names, without being forced to fight through a crowd to stand in front of your favourite painting for five seconds.

What to do if you feel like becoming a more regular Parisian, or even a permanent one, as well as all the pitfalls of buying an apartment in a city where surveyors’ reports are considered a frivolous luxury.